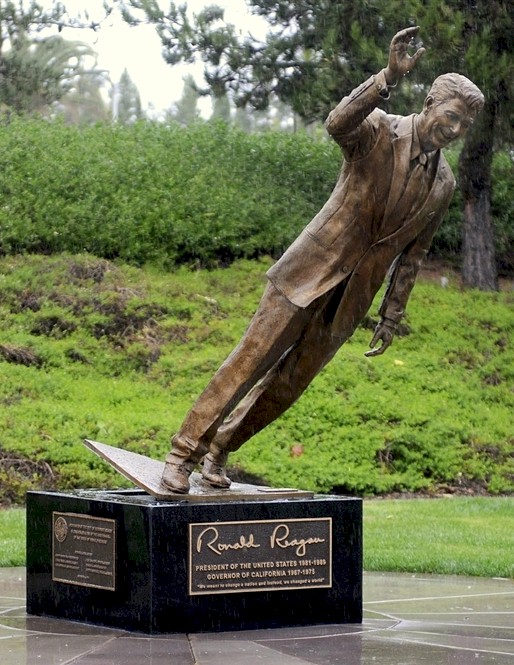 Look.  I’m not going to bullshit around.  Everything depends on our understanding of Time.  That’s the bottom line.  Deasy’s memory of history is not my memory of history, and it is not yours either.  Deasy exists in a world of final causation.  He divides past present and future with mirrored boundaries all reflecting one great goal.  An example.  You want an example?  Here’s an example.  Today in his idolatry of Ronald Reagan he remembered the glory of a miraculous and masterfully designed arms reduction accord with the Soviet Union.  But under Reagan’s presidency the cold war’s arms race escalated to extremes and the reduction made only a small dent in the pile of history destroying weaponry.  History destroying.  If only we could.  How do we destroy the nonexistent?  Deasy remembers a great immortal statesman.  His version of temporality cannot remember the Alzheimers, the shaking, the fumbling of words, the confusion, the memory gaps, the days filled with photo-ops starting at noon and ending at five, the disappearances to his rooms, the handlers, minders, babysitters, doctors, the wife feeding him his lines.  There are people who hold this history.  Who?  Whose memory is this?  Whose history?  Is it created through symbolic causation?  Deterministic causation?  Probabilistic causation?  Does it matter?  It does.  I know it does.  Look.  If you divide past present and future and picture it on a line with the past receding back there somewhere and the future in front of us, then history moves away from relevancy.  That’s one way to understand time.  But is time a line?  Oh our memory returns things to us we thought had long drifted away.  Nothing drifts anywhere.  Think of a memory now.  Go ahead, root around in there and find a big one.  See that scar over there?  That one with the nasty scab?  Ew that looks bad.  Pus.  Infection, it has spread into memories around it.  What was that horrible thing that happened to you?  Jeez.  Ok, pick the scab.  Go ahead, you can do it.  I’m right here.  It’s ok.  Pick it right off and let it bleed a little.  That’s it.  There you go.  That memory sure feels like it is happening again now, doesn’t it?  Still hurts.  Or rather, it hurts again.  It’s not back; it’s always been there.  It’s real.  Is time a line?  You tell me.

One Response to Glorious Pious and Immortal Memory