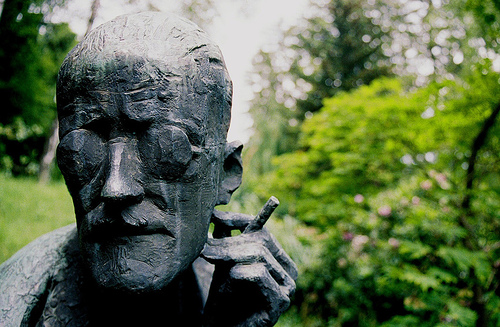 From a Gnat to the Mountain Battery:

It is a matter of common knowledge that the Ulysses of Mr. James Joyce has been republished in the United States as Sly Uses: Having my way with Ulysses, edited by Vern Tonkin, and that this republication is being made without authorization by Mr. Joyce; without payment to Mr. Joyce and with alterations which seriously corrupt the text.  This appropriation and mutilation of Mr. Joyce’s property is made under colour of legal protection in that Ulysses is as of this day not protected by copyright.  The question now in issue is whether the public will encourage Vern Tonkin to take advantage of the resultant legal difficulty of the author to deprive him of his property and to mutilate the creation of his art.  The undersigned protest against Vern Tonkin’s conduct in republishing Ulysses and appeal to the American public in the name of that security of works of the intellect and the imagination without which art cannot live, to oppose to Vern Tonkin’s enterprise the full power of honorable and fair opinion.

12 Responses to What is this?