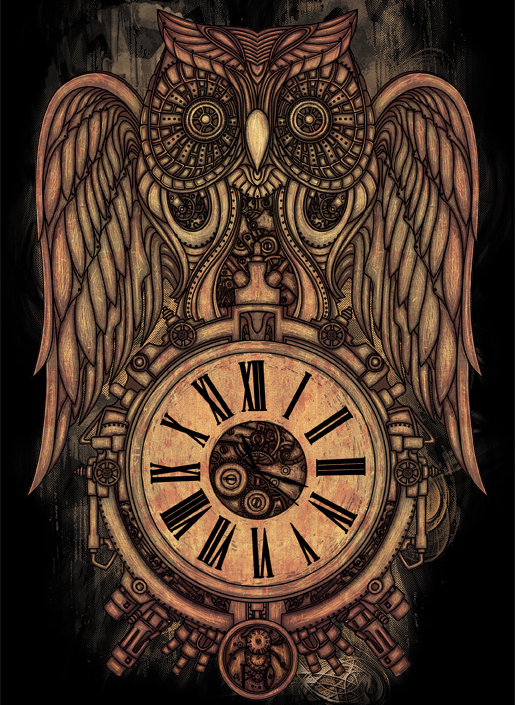 Now watch the clock. Keep your eye on it. There. That was one. Did you blink? I can slow it back down for you if you like, I’ve done it before, but we’d be here forever.

Now pay attention, here it comes again and now! You missed it. Listen. You think this is easy tinkering with time for you? Try to focus. You think it’s everyday a mother and daughter feel simultaneously inclined? Yes it is every day, twenty two times a day, but I’m making a point, you owl, so don’t give me your shit. I can go. You know that, don’t you, I’ll leave. And then when will you be? I thought so. And we just missed another one, so. Yeah. Are we doing this? You ready? You’re not ready. I’m going to have to stop time or I’ll be explaining this until I’m blue in the face.

Now let’s do the math. The hands kiss every hour and five and five elevenths minutes. Get that? Keep up. The daughter moves twelve times as fast as her mother, but that doesn’t mean momma’s not moving too. Frankly I’ll take a woman who understands a good slow rotation any day. But you are young, you like it fast, that’s your deal. So. Just know that momma is moving too, thirty degrees to her girl’s three hundred and sixty, so little miss chica moves fast, but she always plays catch up. Oh so much for her to learn. Do the division, divide little missy’s speed by momma’s endurance. Feel that eleven rising? Right there in your face. And start. And we just missed another one. Right. Right. Kid. Enough mathematics, we need to get scientific now. And musical, let’s try a higher octave. Yes? We can philosophize until the owls come home but that doesn’t get either you or me any nearer either one of them. You ready? Really feel it this time. Now go!