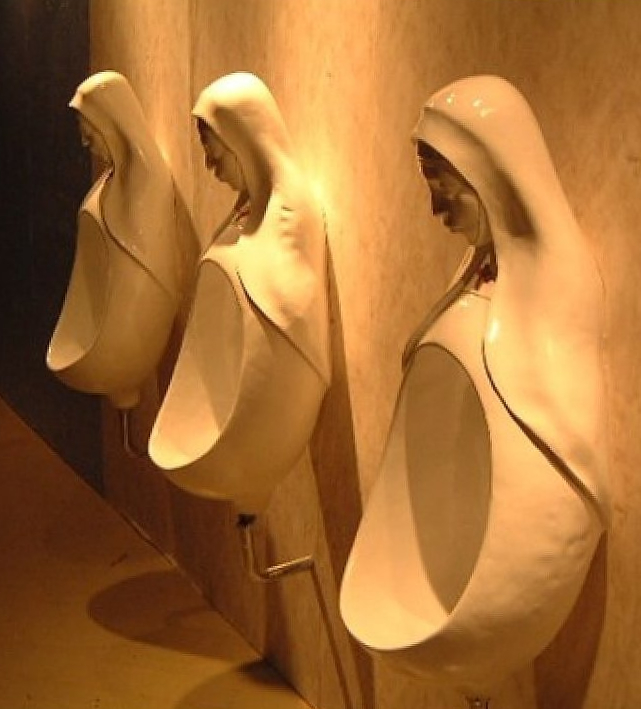 Gala Event at Holy Mother Public Relations had us Praying for the End of Time.
by St. Francis DeSales

To mark the end of the thirteenth Ba’k’tun Holy Mother Public Relations Inc. hosted their first annual End of Existence Gala in the circular Star and Garter Ballroom: the dazzling center found everywhere in the Holy Mother PR Empyrean building whose circumference appears to be nowhere and why am I telling you about the room? I hate duplicity as I hate death, so I’m talking about crap nobody cares about because frankly I want to bury my real feelings about this shitshow of an event somewhere after the first couple of lines to ensure that our Holy Blessed and Most Exalted Mother Mary will have passed out before she gets to the sentence where I call her the booze soaked love child of Courtney Love and a pile of vomit. There, I said it. As I have prior experience covering the various parties Holy Mother PR has thrown in the past to celebrate Mary’s glory I knew to race past the red carpet and find Her Shitfacedness our Holy Lush before she passes out in the men’s urinals. A pity too as I had only a glance at Jesus gingerly exiting his limo with his babyclothes up to one side. I was dying to find out was he circumcised but I had bigger fish to fry as apparently did the “ladies” of  the Tranquila Convent who catered this stinker of a party with what can only be an ironically inspired all seafood menu. Ghastly. Everything fried in butter: they love buttering themselves in and out, though to their credit they served a potent egg nog which Sister Mary Peter described as eggs beaten up with marsala. One taste of that and I knew why I was far too late to interview Mary. Though, with all the optimism of a rookie I pressed on, seeking her out in all her usual puking places: closets and behind statues, but I could not find Her Drunkenness anywhere and I stopped looking when I saw the out of order sign on the men’s lavatory door.  Alas, Mary was already face down in a pool of her own vomit and piss. I’d say they ought to dedicate the urinals in Her Holy Name but in that case they’d probably throw another one of these disastrous events to mark the occasion and I’d have to cover it.  I was late for Mary but I found myself just in time and unfortunately perfectly placed for the unveiling of Negative Destiny by new sculptor Martha. While some might try to make a cat cleanly by rubbing its nose in its own filth, Martha has tried the same treatment on The Annunciation, and Negative Destiny comes off as a rather fleshy cross between The Annunciation and The Incarnation. But with more slime. This mixed media piece is curious the way it’s made and I asked Martha what are all those veins and things but I won’t reveal her answer. Trust me, it is better not to know. Martha’s sculpture managed to renew my faith in the end of the world, and indeed to wish it had come before Martha had ever been born. I don’t want to say that it is bad, not at all. It succeeds gloriously in finding new ways to suck. O lord I wanted to shout out all sorts of things fuck or shit or anything at all just to distract myself and indeed to save some of the others: anything to tear my ruined eyes from that ugly quivering disgusting thing placed up there like any other statue in a museum, and the crap sculpture she had just unveiled. Martha ought to take a good look at herself but a mirror never gives you the expression. My advice to you Martha: check herself into the Tranquilla convent, they’ll take anybody.