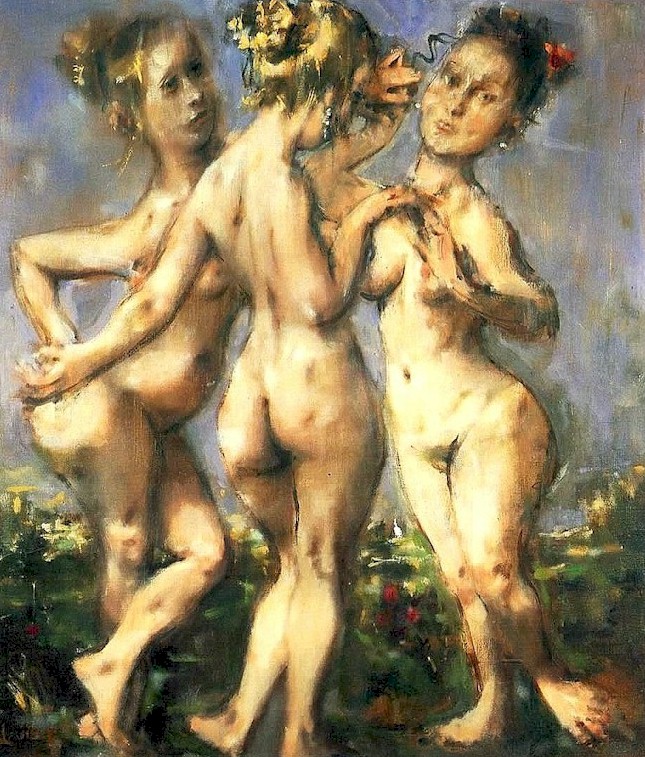 I saw it.  I was present.  I saw with eyes that were no less amazed than his.  I was good but he was all their daddies.  Psha! you say.  Psha!  Well, it has been centuries and he is still the one who makes our gaze more ardent.  I see your mouth twitching, unspeaking in nervous curls of disdain.  Who would wish that mouth for any kiss?  How do I know?  Well, why did I write it then?  Oh but what he does with words.  He writes about eternity using a temporal art and how?  By twisting it, entwining it, tossing in numbers and ratios and divine proportions.  He uses circles to move time into eternity and more impossible to move eternity into time.  He speaks the ineffable.  And then he serves it to us on a peaceful golden flame and we eat and drink and slurp it yum into our souls.  Oh we are all in the middle of the path of life, locked into a moving now between past and future and elsewhen.  Now is real, all else is a feature of imagination.  No matter our age, we are all in the middle of the path of life.  He knew this.  And he mimics this in his rhymes.  Here are some line endings:

Rhyme now sublime.  Catch that movement?  Oh feel it move you.  Forward and backward.  The middle word of the first becomes the outer words of the next.  Forward and backward and forward and backward.  Whenever we are in our temporal trajectory, we are always in the middle.  Three by three, his words are female forms entwining.  His words are like a boat that, starting from its moorings, moves backward, backforeward, so he may move us forward.  Ah my friend, take no more from me, my eyes are all amazement.  Look at us now, old men.  Penitent.  Dressed the same, looking the same.  Await no further word or sign from me: your will is free, erect, and whole — to act against that will would be to err:  therefore I crown and miter you over yourself.  And when I said this he looked at me, his sight becoming pure, and he let me know that will is free, to a point.  And what’s the point?  The point in which all times are present.  The point that sent forth so acute a light that anyone who faced the force with which it blazed would have to shut his eyes.  The point on which depends the heavens and the whole of nature.  The point that has no extension in space or time.  The point indivisible.  The point that is the start of all geometric possibilities.  The one point all whens and wheres end.  The point that seems enclosed by that which it encloses.  The point that is both circumference and circle.  The point which says that separate things can be the same thing.  The point that says our own existence in the middle of the path of successive time necessitates these distinctions.  Oh my God, the point.