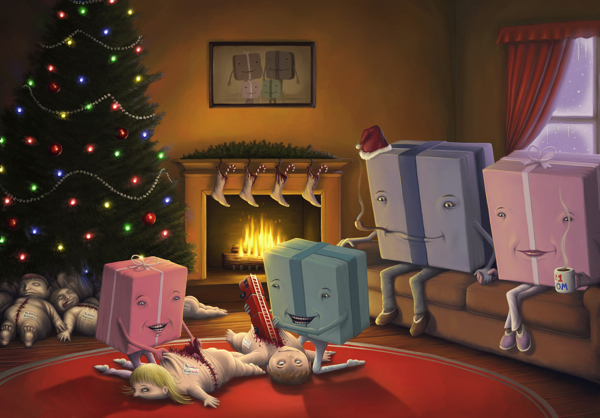 Seasons greetings from my family to yours!!! I can’t believe the year has come and gone so quickly!!! I do hope the holidays find you well and happy!!!! We Temporals have had a banner year and look forward to more happy times to come!!! Indeed both Paulie and Polly have big plans for their future as I imagine you are well aware. Aren’t they frightful trying to hurt you?!! Sweet imps. Children do enjoy destruction. Perhaps it is my fault for breastfeeding only the one of them, and for such a long time too: like some kind of big infant I had at me! The doctors did think it would help our twins differentiate a bit from each other if one breastfed and the other watched with a bottle of formula, I don’t know. Maybe that wasn’t the best choice. But no matter, onward and upward!!!! Though do be careful my dear, they intend to destroy much of what you’ve done here and turn what’s left over into some sort of frightful playground of their own. As their parent I won’t be one to stifle their creativity, so perhaps its best to leave that part up to you. So heads up my dear!! I did ground Paulie recently for what appeared to be another attempt to, well, harm his sister. He says it was the other way around, but Polly is such a delightful nymph with a loving and kind heart, especially toward her brother that I just can’t imagine her wishing even to touch a single hair on his sweet lovely little head!! And certainly not during the holidays!!! Oh her burns are coming along quite nicely, by the way. Healing up a treat!! Now don’t take me the wrong way, Paulie is just as loving and kind as his sister, but he does like to play rough. Boys! So charming!! All sticks and snails and puppy dog tails though I do dislike the dog tails, they can be frightfully bloody. Well Sly my dear dear dear dear friend, I would love to invite you over for oranges and lemonade to make you feel nice and watery, but you do understand I am sure.  Have a merry merry!! And a safe and vigilant new year!!!!