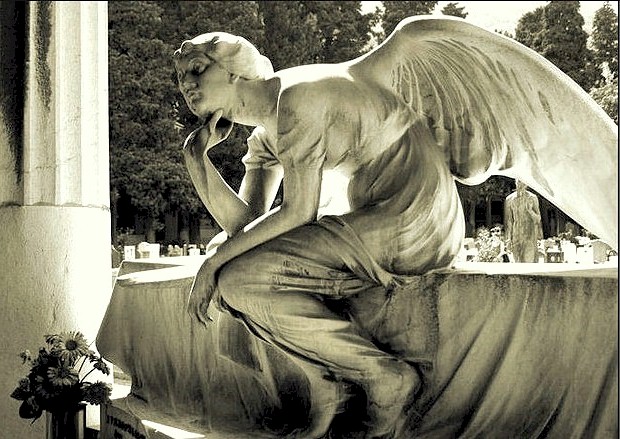 Oh sweet God I’m bored.  Bored bored bored.  Thank you, come again.  Nice of them to leave a few flowers.  I like daisies.   Nice smell.  Well, they could smell like shit for all I’d know.  Or care.  Jesus I’m bored.  Nice to feel warm beings near you though.  All that warm fullblooded life.  That creepy one will be back and with a shovel.  Scrape up the earth to get at the fresh buried female.  Never mind the corpse rot.  Pustules.  Bored bored bored bored bored bored bored doo daa doo daa.  Wish I could drape myself over some casket like what’s her name over there.  What is her christian name?  I’m not sure.  Next to Emily Sinico, crushed by a slow moving train.  Lying there with a bird on her head.  Rooks in here a bit ago.  And an owl.  Looked stuffed.  Wish we had one of those what are they called silent towers.  Dakhma.  Want to see a tower of silence, just stop by here any time you like.  Won’t hear us say a damn thing.  Wouldn’t mind seeing a Dakhma in action.  The buzzards tearing the flesh off.  Rotting carcasses touching neither fire nor earth but vulture lunch, no problem.   Bon Appetite.  Good food good meat good God let’s eat.  Bet you I’d smell that.  Woof!  Well, that’s one way to handle it.  Cremation would be interesting too but nobody gets to watch that.  Priests against it too.  Nothing to raise up at the second coming.  Nothing to raise up regardless. Rats. There’s one right under me right now.  See it?  There.  Tail gone now.  Corpse is ordinary meat to them.  Meat gone bad.  Like cheese is milk gone bad.  Cheese is the corpse of milk.  Wouldn’t mind smelling a nice stinky cheese.  Or anything.  Rats get that crumbling mush of corpse smell.  Would be something.  Bored.  Flowers.  Better to spend the money on the living.  More sensible.  Are those flowers fake?  They are starting to look fake.  Great.  Never wilting.  Expresses nothing.  Immortelles.  Won’t get to watch them die.  Wouldn’t mind seeing a drowned corpse.  I hear that is a nice gentle decomposition.  Would enjoy watching.  Not like here.  Plant him and have done with him.  Those plague years with open pits and quicklime melting everything away.  Now there’s something to see.  I would have liked that.  Wasn’t a bad sermon just then.  We’re here to celebrate the life of.  Didn’t look much like a party to me.  Let us pray for the repose of the soul of but does anybody really?  People looking at their hands.  Check the nails.  Just looking at them: well pared.  He who departed this life, as if he did it on his own.  Then leave us with another rock that says beloved father, son and no longer beloved ex-husband of.   Well, they always leave that part out.   An acre of lies.  Here lies an enormous bastard we all hated.  Good riddance to the crank who finally kicked the bucket.  Irritating bitch beloved by nobody special.  And people don’t visit anymore.  Dump them in and take off.  Well, as you are now so once were we.  Ever think of that?   Watch out or your dead will come back to the world.  I will appear to you after death.  You will see my ghost after death.  My ghost will haunt you after death.  There is another world after death.  And thank God for it.  Do I want to be brought back to life?  Hell no.  I do not like that other world.  I’ll stay here haunting my statue, thank you, I love it here.