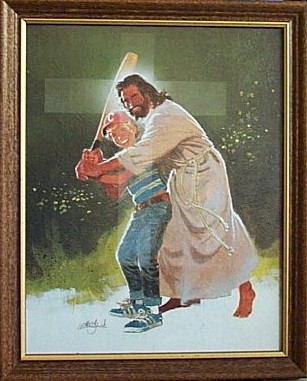 Haines, steeped in a study of American fundamentalism, asked me if I had ever accepted Jesus as my personal lord and savior.  Jesus Christ.   He must suspect all Americans think that if dinosaur bones exist then there must be dinosaurs roaming around somewhere.  What God created must always be, no?  Or more likely he must think that in America everybody thinks the bible is a voice talking about us now.  Right now.  See here in Psalms, it says that the economic downturn will end soon.  Such good news!  Good God.  Yes, Haines, all America believes that in the beginning God said let the earth bring forth living creatures of every kind: cattle and creeping things and wild animals of the earth and also under the earth, bones of dead things with aged appearance, and let humanity find these things and argue about Time’s beginnings and how long everything took to make, and big bangs and original sins and first floods and first falls and lines of time and a beginning and an end and a guy on a throne who created it all and has since kept busy involving himself in the daily minutia of our lives.  Jesus it took six thousand years to get through one conversation with Haines.  He wanted to know about creationism in schools and that sort of thing, but Haines, most (I do not say all) Americans have a fine understanding of Darwin.  Let’s hear some nice reasonable science from the man himself and end this discussion right now:

Charles Darwin:  There is grandeur in this view of life, with its several powers, having been originally breathed by the Creator into a few forms or into one.

Shut up, Darwin!  Come on man, back me up.  What the hell are you doing?  Good Christ take it back.

Charles Darwin:  I have long regretted that I truckled to public opinion and used the Pentateuchal term of creation by which I really meant “appeared” by some wholly unknown process.

I deny successive Time and the deity it creates.  You behold in me a horrible example of free thought.